Allira Toby: The time is now for Indigenous women and girls

Proud Kanolu and Gangulu woman Allira Toby took the path less travelled when it came to her footballing career, but in the process blazed a trail that she hopes changes the game for Indigenous women and girls who have dreams of pursuing a career in the beautiful game.

Toby's mob comes from Mount Morgan, a rural mining town in Central Queensland around 30 minutes from Rockhampton and the Canberra United forward grew up with football in her blood.

"Football has been a part of my family since way before my time," Toby said.

"My grandparents on my father's side actually started the first football club in Mount Morgan, which was really cool.

"I grew up watching dad play from the minute I was born and he was a pretty amazing player. My uncles on both sides also played, so I don't think there was any other route I was going to take."

Although football was the sport of choice for her family, within Indigenous communities generally, that was not the case.

Toby was the first female of her family to lace up the boots and reach the top-division level, despite no other women from her mob doing the same.

"I'm the only female in my family who has played at my level, but generally, it's AFL and rugby league that has a large participation by our mob. The participation in sport is great to see, but you don't see a lot of it in football," she explained.

"I think it starts at grassroots, where our mob don't actually get involved in football and opt for those other sports. It's not until they get older and are exposed to things like the A-League Women's, that young Indigenous girls consider football to be a feasible path to play the game and make an earning."

Due to the lack of grassroots participation, Toby didn't come through the usual pathways. There was no progression through the ranks of a football institute or a sporting high school program, she was actually scouted by chance when she was a teenager.

"I'm not a player that went through any of the systems within Australia, which is wild," Toby said.

"The only way I actually got on the radar, was when I was playing a high school game one afternoon and one of the refs was a coach. 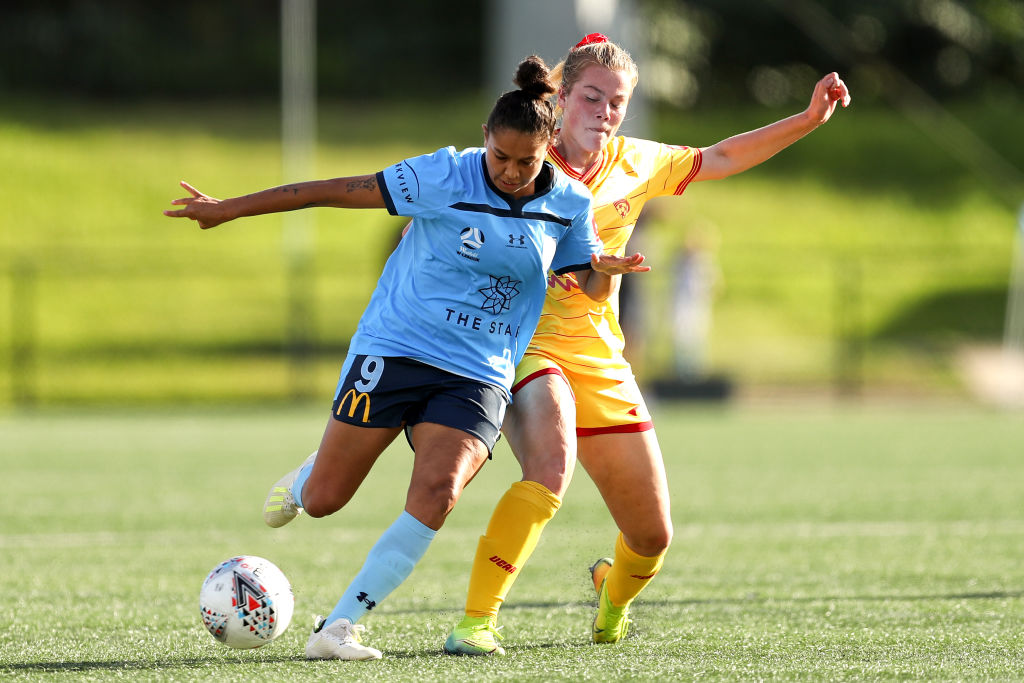 "He said, 'You should come and check out training and come and play for me,' and that was pretty much it, so, for me, it was all about being in the right place, right time. He was the one who put me in front of the right people. It was really only luck of the draw, but here I am now," she continued.

"It was difficult as a young girl because back then, I feel like the W-League still wasn't as visible as it should have been," she continued.

"Obviously I knew it was there, but it wasn't something I thought I could actually ever achieve. I mean, I would dream about it, but I never thought it was actually possible."

Toby made her W-League debut in the 2015/16 season for Adelaide United when she was 19, she then moved back to Queensland to play with Brisbane Roar who she stayed with until 2020, scoring 14 goals.

At the height of the pandemic, she was offered the opportunity of a lifetime, to travel to Portugal and play for Famalicão. She flew over and played in a pre-season friendly in Spain but after a few months, Toby and the club parted ways.

The 27-year-old says that the greatest positive of her move overseas was being able to show Indigenous girls and women that football is capable of opening up doors they may have never dreamed of.

"Even though it didn't go the way I'd planned, Portugal was an unreal experience," Toby said.

"The few short months that I was there, were unbelievable. The football I experienced, living in a different country where I couldn't understand anyone and still making some really cool friends, was pretty amazing.

"It really made me appreciate what Australia has to offer in terms of football and how far it has come, especially for women. That experience really helped me understand what I want to do.

"Being in the public eye and doing what I can for my community is really special. Going overseas and having a move that was pretty much a 'failure,' become a win because of what it meant on a larger scale, is incredible."

Off the pitch, Toby has worked as a high school counsellor, helping Indigenous students with their education. She was also an ambassador for the inaugural Australian Premier Indigenous Football Championships and works with the John Moriarty Foundation to ensure effective pathways and opportunities for Indigenous children in football.

"I'm a big believer in needing to see people of your culture represented, to feel like you belong there too," Toby shared.

"When I was growing up, it was really only Cathy Freeman in the spotlight when it came to Indigenous female athletes, so to see her was just phenomenal, but we needed more.

"If the visibility is there, in all parts of the game, that encourages people to get involved. Especially with Indigenous kids, it's hard to believe in yourself when things seem out of reach and I know that a lot of Indigenous kids would feel that way when it comes to having a career in elite sport.

"You need to see people who look like you, who represent your culture, achieving, in order for you to believe you can too."

"I played with Jada [Whyman] at Sydney FC and that was really special to me. It was a cool experience and Jada, herself, is amazing," she said.

"You've got Lydia Williams, Kyah Simon, Gema Simon and Shay Evans as well, who are all great role models, so for me to also be considered as one, leaves me a little bit speechless because I don't really look at myself like that, even though, it actually is the truth.

"It's very humbling and I'm just really proud of who I am and of my culture. I'm also very happy that I get the opportunity of having a platform to help future generations of Indigenous kids who want to make a living out of either football or just whatever they want to do in general."

With the FIFA 2023 Women's World Cup on home soil in just over one year, Toby says the time is now for Indigenous women and girls in football.

"It's our time. Women are thriving in every aspect of life at the moment, not only in sport but in business, whatever it may be. So I think if there's anything you want to do, now's the time to do it. Women are dominating, and it is very pleasant to see."

Join the #OURGAME community. The future of women's football is HERE